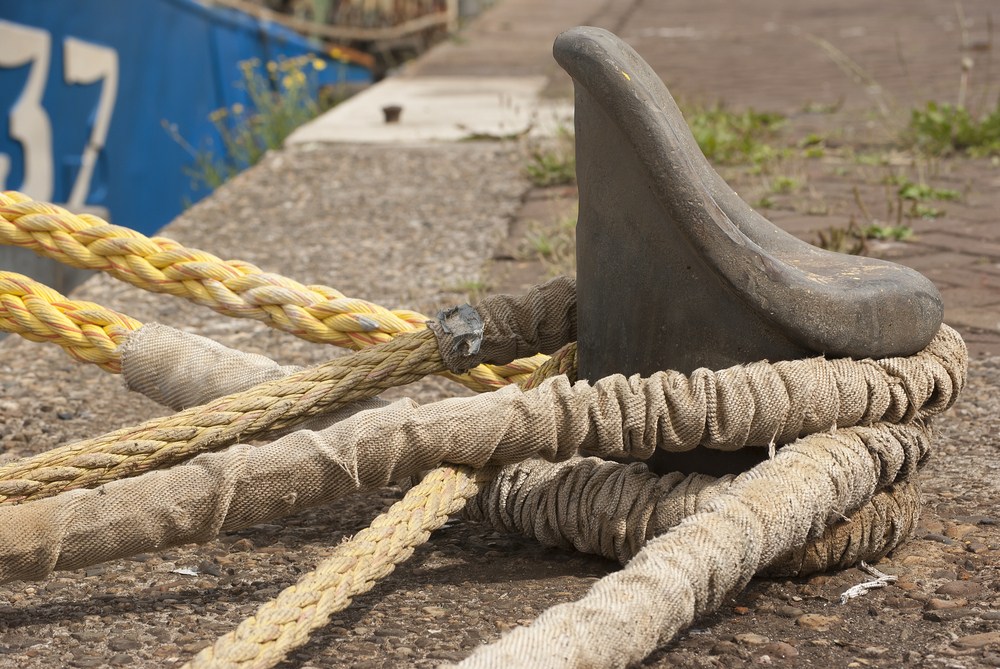 Modern shipping is all about change. New vessel shapes, designs, and capabilities are evolving like never before. In our new Crewtoo series, we look at those technical changes…in this article we look at the design and development of mooring ropes.

One thing about ships that has never changed is the fact they need to come alongside and be moored. From the ancient Egyptians and Greeks, through the famous clippers, Titanic and even the largest box ships of today.

They all share the one common need – somehow once moved into position, they need to be secured and held (roughly) in place. With as little movement as possible as they sit alongside.

Whether it is passengers disembarking, or cargo being loaded or discharged, vessels need to sit on their berth, and allow gangways, accommodation ladders, cranes, grabs, pipes and whatever, to be attached or to move from shore-ship-shore.

So, from the very first ships – whether on rivers, lakes or at sea – they have all relied on the humble rope to provide them with the ability to come alongside. For many years, even anchors were attached using ropes.

So, as we can see without rope seafaring would have been impossible. Perhaps the cradle of the first mariners was the River Nile, and the Egyptians used ropes widely. Without them, even the use of the Nile would have been restricted to paddling up- and down-river in dug-outs.

The ability to not only secure their vessels alongside, but to be able to tie things, animals, cargo and even people, meant that vessels became the lifeblood of trade and ancient industry.

It was ropes that made the pyramids, and it was rope that allowed fishing – so from the smallest enterprise, to the largest endeavour – rope has long been at the core of human development and ingenuity.

The Egyptians made use of ropes in many different ways when it came to shipping: they would tie together bundles of reeds to form a raft or the planking of the hull of wooden ships, they used it for rigging sailing vessels – and as halyards, mooring lines, hawsers running from stem to bow, as ropes used as fulcrum for oars and rudders, tow lines, and to secure anchors.

Ropes are the vital, they may not be much to look at, and can perhaps be forgotten about – but it was at the base of human culture. The first “ropes” were made of plant fibres. The earliest reed ropes found date from the Badarian, the second half of the fifth millennium BC.

From simply using a length of reed to secure something, the ancients decided to get more inventive. They began to twine the fibres from papyrus, wild reeds, rushes, and grasses together. This was rope making.

Ropes were occasionally made by braiding three strands of material together, but the main manufacturing technique consisted in twisting two or more yarns of the same thickness individually in the same direction and then combining the strands by twisting them together in the opposite direction. The resulting cord could be twisted together with similar chords to form a rope of even greater girth. The ends of twisted rope were tied up to keep them from unravelling. The finished rope was beaten with a wooden implement or brushed, coiled up while paying attention that no kinking occurred and stored as a coil.

The invention of rope was one of the more ingenious ideas ancient mankind had: taking weak, short pieces of fibrous material and turning them into strong extended lengths of rope which had numerous uses.

So, rope is a group of yarns, plies, fibres or strands that are twisted or braided together into a larger and stronger form. Ropes have tensile strength and so can be used for dragging and lifting, but are too flexible to provide compressive strength. As a result, they cannot be used for pushing or similar compressive applications.

The basics remained the same for thousands of years. A twisting process brought fibres together, and a rope would be spun. In the Middle Ages (from the 13th to the 18th centuries), from the British Isles to Italy, ropes were constructed in ropewalks, very long buildings where strands the full length of the rope were spread out and then laid up or twisted together to form the rope.

The cable length was thus set by the length of the available rope walk. This is related to the unit of length termed cable length. This allowed for long ropes of up to 300 yards (274 metres) long or longer to be made. These long ropes were necessary in shipping as short ropes would require splicing to make them long enough to use for sheets and halyards. Cities still often refer to their “Rope Walks” – Liverpool for instance is very proud of its rope making heritage.

The greatest minds have been fascinated by rope. Leonardo da Vinci drew sketches of a concept for a ropemaking machine, but it was never built. Nevertheless, remarkable feats of construction were accomplished without advanced technology: In 1586, Domenico Fontana erected the 327-ton obelisk on Rome’s Saint Peter’s Square with a concerted effort of 900 men, 75 horses, and countless pulleys and meters of rope. By the late 18th century several working machines had been built and patented.

In the 1500’s, rope was often made in people’s own homes by skilled workers and sold locally. The yarns were attached to hooks turned by hand to twist them together. While in the 1700s and 1800s, new inventions meant yarns could be spun by machine. Rope factories and spinning mills were built, and new materials were developed. While Some rope is still made from natural fibres, such as coir and sisal, despite the dominance of synthetic fibres such as nylon and polypropylene, which have become increasingly popular since the 1950s.

Polypropylene is extremely popular for shipping, as it is light, it also floats and is relatively inexpensive. This makes it very popular for ship mooring ropes. It is not all good news; such ropes must be treated and handled properly. They are affected by sunlight deterioration, more so than any other synthetic or natural fibre rope, but this can be overcome by adding an UV stabiliser or by keeping it away from direct sunlight. While being left in pools of water can also degrade the fibres over time.

There have been many other developments over the past half a century, and perhaps the most fascinating modern rope is constructed from dyneema. Which is apparently the world’s strongest fibre, and made of a high-modulus polyethylene. Dyneema ropes are incredibly strong, around 15times stronger than steel.

You can see mooring ropes have come a long way from reeds, to twisting fibres and now high-tech materials. What do you think? Which kind of mooring ropes are you using? Let us know, we’d love to hear your thoughts…