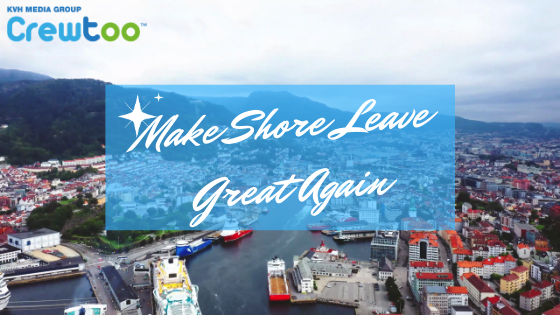 “Shore leave is dead. Never will it be seen again”. That was the stark assessment from seafarers sharing their views through the Happiness Index. With so many challenges for crew wanting to simply get some time ashore, we can see why they might think that. Let’s look at the good, bad and ugly of getting off the ship.

Shore leave not only used to be an incredibly important part of shipping but also of global culture too. When ships were packed with crew, and when they had plenty of time (perhaps weeks alongside), then when they went ashore, they sure made an impact.

Seafarers used to have their own areas of cities; such was their importance. Yes, they weren’t the kind of parts of town you’d take your grandmother too…unless your grandmother was the type who was already there of course.

The life of those at sea then was about the baser things in life – there was women, there was alcohol, and there were the things which made both of those happen. So, all in all, shore leave was quite a thing.

Times change, and of course the life of a seafarer is nothing like even a few decades ago. In the past 50 years, there has been incredible changes, gone are the wharfs alongside the city. Gone are the bars, the girls, the fights and the hundreds of crew all ready for a run up the road. Now things are more sedate, but that doesn’t detract from the importance of getting ashore.

Things have changed, hectic port stays with rapid turnarounds mean ramped up duties. This makes it even harder for seafarers to get the time, or even to feel the inclination to go ashore. There are so many inspections to be completed, as well as audits, maintenance and all manner of visitors to satisfy, as well as the small matter of cargo work.

This sadly means that many seafarers feel they cannot be bothered with the hassle of shore leave. While the pressures make some senior officers loathe to grant time off.

The shore leave Catch22 seems to be that if there is enough time during a port stay to leave the ship, then it seems that invariably, it will either be difficult to get from the ship to the gates, and perhaps even more so to actual downtowns. Civilisation and ships are not good bedfellows, with so many terminals so remote from towns and cities.

The ability or lack of opportunity to spend time ashore is a perennial problem area for the modern seafarer. Once more the returns we received painted time alongside as a time of inspections, and more work to be done, rather than relaxation or a chance to get off the ship.

“Seafarers know how important and positive shore leave is, but despite the positives of being able to unwind and escape the pressures of shipboard life, even for a short period, there are constant barriers.”

WHAT DO SEAFARERS SAY?

In the recent Seafarers Happiness Index report from the Mission to Seafarers, time and time again crew made startlingly similar comments about the cost, hassle and lack of things to do when ashore.

There were also more reports that there is culture developing onboard which looks down on seafarers seeking to get ashore. There are even reports that crew becoming increasingly embroiled in inspections and audits, there is almost a “jealousy” and “resentment” which was helping to make shore leave even less attractive. Some even likened shore leave to being on “parole” – with other officers back on the ship always trying to ensure that crew return as quickly as possible, and seemingly without having had any enjoyment.

Time and time again, respondents stated that shore leave is becoming an “impossibility” – even more so on some vessels. Tankers were singled out, but there were common threads across a number of vessel types. Many crew are dismayed by the physical security barriers which stop them getting shore leave, while others state that it is cost, as taxi drivers or local authorities combine to fleece them.

Time is money, money is time…

While rather strangely, some see that shorter trips are having an impact. With some crews now “only” away for 2-3 months, then often they simply decide not to bother. They focus on saving, and just getting through their time to get back home. They prefer seeing new places on vacation, rather than as a seafarer.

Seafaring is a highly pressurised job, and so the chance to break free from the norm is seen as being hugely beneficial. There are such benefits from seafarers being able to “relax” and gain much needed time to themselves.

Seafarers know how important and positive shore leave is, but despite the positives of being able to unwind and escape the pressures of shipboard life, even for a short period, there are constant barriers.

It isn’t just those currently at sea, this could impact a whole new generation too. One of the enduring appeals of going to sea has been to experience new countries and to visit ports. Now, as crews are being denied or simply deciding against the bother, then it seems that this major recruitment hook is being eroded.

It is very sad to see such as staple of the traditional mariners’ life being eroded. This is not good for the profession, for the mental health and wellbeing of crew, and actually undermines the culture of shipping and the maritime industry. All very sad, really.

HOW TO MAKE SHORE LEAVE COUNT

Maybe then it is time to think about shore leave differently. This is not, anymore, about wine, women, and song. This is about taking the right decisions for the health and wellbeing of those at sea. We should then rebrand it…so no longer shore leave. Now, we shall have “mental resilience excursions”. Which will be built into the safety management system, and which will be a pillar of positive recruitment and retention.

The excursions will be properly organised so there will be no question of crews being ripped off or held up by petty officials. There may well be costs associated, but a good shipping company should pay for such trips, as a small spend on this type of activity could make the vessel run safer, more efficient and happier.

The trips ashore will have time for Instagram stop-offs – all the best places to visit, all captured to make seafarers the talk of their friends at home once more. Which brings us to some new thinking from the Seafarers’ Trust, and their Shore Leave app designed for seafarers.

The app will encourage seafarers to visit welfare centres, they will be able to read reviews from other crews and to find out the best places to go. With the support of those who have visited before they can pin down the best sport facilities, good bars, transport options. Once again, we hope that seafarers can get the most out of their Shore Leave. https://www.seafarerstrust.org/shore-leave-3-0/

What do you think about shore leave? Have you been ripped off, denied access to shore, or are just plain too tired to be bothered? We would love to hear from you and how you would like to make shore leave great again.